NOTE: ZOOM OUT to read SIDE NOTES

"Nebuchadnezzar dreamed dreams, wherewith his spirit was troubled.  Then the king
commanded the magicians, and the astrologers, and the sorcerers, and the Chaldeans,
for to shew (show) the king his dreams. So they came and stood before the king and they

failed to interpret the dream.  This lead to God giving Daniel the interpretation of the dream
which was "what shall be in the latter days"(Dan.2:28) "the God of heaven set up a king-
dom, which shall never be destroyed: and the kingdom shall not be left to other people,
but it shall break in pieces and consume all these kingdoms, and it shall stand for ever.
Forasmuch as thou sawest (you saw) that the stone was cut out of the mountain without
hands, and that it brake in pieces the iron, the brass, the clay, the silver, and the gold; the
great God hath made known to the king what shall come to pass hereafter: and the dream
is certain, and the interpretation thereof sure. (Dan.2:36-44)

A.  The focus of this dreamis "what shall be in the latter days"

not slack (tardy / late)[0] concerning his promise, as some men count slackness; but
is long suffering to us-ward, not willing that any should perish, but that all should
come to repentance. (2Peter.3:8-9, Psa.90:4)

You may say, "we are in the last of the last days"

2.  NOTE: The Stonecut out of the mountain without hands

C. "After thee (you) shall arise another kingdom" (Silver)

Daniel told Nebuchadnezzar that there "shall arise another kingdom inferior to
thee (you)" (Dan.2:32,39). This kingdom was Media-Persia and is not named by
Daniel in his interpretation but Gabriel does in Dan.8:20-21.  Also History does
tell us the next kingdom after Babylon was Media-Persia. (NOTE: Also in Dan.11:1-2)

NOTE: God sovereignlycontrolled Cyrus(Ezra.1:1-2) to release the House of Judah
would be released exactly as Daniel prophesied it would (Dan.9:24-27, Ezra.1:1-5) to
fulfill His purpose. Israel could count the number of years  from the "going forth of the
commandment to restore and to build Jerusalem, until MESSIAH would come.

D. "And another kingdom of Brass"

Daniel told Nebuchadnezzar that there would be a third kingdom, (the belly
and thighs of brass that shall "bear rule over all the earth" (Dan.2:39). History
records this to be the kingdom of Greece, under the leadership of Alexander
the great and Gabriel also acknowledges Greece as the next kingdom
(Dan.8:20-21; 11:1-4

E. "The fourth kingdom shall be strong as iron"

The "fourth kingdom (the legs of the image) shall be strong as iron: forasmuch
as iron breaketh (breaks) in pieces and subdueth (subdues) all things...shall it
break in pieces and bruise" (Dan.2:40). History records this "fourth kingdom" to
be Rome[0] which was divided into two, east and west.


NOTE: This chartis IT IS NOT SAYING that the earth is only 6,000 years old or that the Second Coming is at the end
of the 6th day. This chartbegins when sin entered the word until the end of the 1000 year rest (the Millennium / 7th day)
taking into account that GOD WORKS 6 DAYS and RESTS the 7th. in His Creation and in His Redemption Plan.

NOTE: The next dream and vision of our study (Dan.7:1-28)will overlay Nebuchadnezzar's
dream and expand on "the days of these kings"
(a)  Between the 10 kings and the Second Coming, (Dan.2:40-45) there is a "little horn"
(Dan.7:8,20-25) that shall arise. This is the antichrist because of this identification mark
that "he shall wear out the saints...until time, times and dividing of time." (Dan.7:24-26,
Rev.13:5) until the ancient of days takes away his dominion
(b)  This is is harmony with what Paul wrote to the Thessalonians. "That day (Second Coming)
shall not come...except the man of sin be revealed first(2Thes.2:1-4) who JESUS / MESSIAH
shall destroy him with the brightness of His Coming.
(c)  ALSO NOTE: That in the Book of Daniel and Revelation there is ONLY ONE Second Coming

1.  God is Sovereign[0] and Providential[0]over all kingdoms

CONCLUSION: THE LAND is pictuing God's Purpose. To destroy this is the come against God
Don't voilate His patterns.  What God was doing here with Nebuchadnezzar was being consistent
with His overall Redemptive purpose IN THE MIDST OF THE CAPTIVITY of Babylon w

b.  Nebuchadnezzar was the instrument to fulfill HIS PURPOSE
(1)

c.  This desolation would come with God "sovereighly" using Nebuchadnezzar

(a)  We are still during the reign of the 4thkingdom / ROME / The two legs of Nebuchadnezzar's
dream. NOTE: It was Rabbis, Pharisees, Saduccees with the power of the 4thkingdom /
ROME that Crucified (cut off) Jesus / Messiah
(b)  Jesus gave Himself to reconcile BOTH JEW and GENTILE (in other words "whosoever will"
(Eph.2:1-22; 3:1-12) for His Church (Eph.5:21-33)

3.   Daniel interpreted that this sovereignty will continue until the "latter days" when a "stone cut out
of the mountain" / THE SECOND COMING OF MESSIAH (THE LORD JESUS CHRIST)

a.  After the Babylonian Empire, Daniel prophesy's also true concerning Media-Persia, Greece,
the 4th kingdom
b.  This will also be true concerning (the "legs, feet, toes"/ 4th kingdom / ROME)
c.  Also true when God USES the reign of antichrist to fit His Purpose at the end of the "latter days"
When "the stone cut out of the mountain without hands" (Dan.2:45) /
The Second Coming of THE LORD JESUS CHRIST / MESSIAH. (Rev.13:7, Rom.13:1, 2Thes.2:11)

3.   After placing Nebuchadnezzar as king of the Babylon Empire
4.   While in captivity Daniel was reading towards to end of the 70 years of captivity which caused him to set
his face to seek the Lord because he realized that the House of Judah was about to be released
by the SAME SOVEREIGN hand of God that allowed them to go into captivity. (Dan.9:1-2)

5.   It was during this time (70 year captivity) that Daniel received these dreams and visions
a.  Interpreted Nebuchadnezzar's dream (Dan.2:1-45)
(1)  Babylon, Media-Persia, Greece, and the dreadful 4th kingdom that will be combined in the
Latter days
(2)  .
b.  Vision of the "little Horn" out of those 10 last day kingdoms
c.  The Ram and he goat vision - trying to destroy the geology
d.  The Seventy Week

NOTE: How God has removed the House of Judah (including Daniel) from the Land
using Nebuchadnezzar (Babylon / the head of gold). THEN gave Nebuchadnezzar a
Dream of His Sovereignty over the kingdoms of this world in the "latter days"

6.  Other examples of God's Sovereignty
a.  Cyrus
b.  Nehemiah
c.  Joseph in Egypt

a.  Some Extra thoughts

2.  When God gave Daniel these prophetic pictures He was not forgetting His original PURPOSE
since the the beginning of the world.
a.  God was preserving the House of Judah, even though they were in 70 years of captivity
b.  Notice in these visions there are warnings to God's people not to get mixed up with the
kingdoms of this world (Not entangled with / mingled)

3.  We MUST remember this dream of Nebuchadnezzar and the other visions the Daniel saw were
One BIG pictured / not double minded /
Looking at Book of Daniel and Revelation

F.  The two iron legs (Rome) with feet that have ten toes

"In the days of these kings  (the two legs and ten toes) shall the God of heaven set up a kingdom,
which shall never be destroyed: and the kingdom shall not be left to other people, but it shall break in
pieces and consume all these kingdoms, and it shall stand for ever.  Forasmuch as thou (you) sawest
(saw) that the stone was cut out of the mountain without hands, and that it brake in pieces the iron, the
brass, the clay, the silver, and the gold; the great God hath made known to the king what shall come to
pass hereafter: and the dream is certain, and the interpretation thereof sure." (Dan.2:41-45)

NOTE: This is because all of Daniel's Visions and prophecies saying ONE THING

G.  The stone cut out of the mountain without hands

Forasmuch as thou (you) sawest (saw) that the stone was cut out of the mountain without hands, and
that it brake in pieces the iron, the brass, the clay, the silver, and the gold; the great God hath made
known to the king what shall come to pass hereafter: and the dream is certain, and the interpretation
thereof sure." (Dan.2:41-45)

1.  NOTE: The stone comes one time (all the way to the earth)
This is expanded in

2.  The iron, the brass, the clay, the silver, and the gold
Past kingdoms yet present. These paralell the Lion. Leopard, Bear and the 4th kin dreadful

NOTE: This important to understand because this "horn" will be the antichrist that wants to
destroy God's Purpose. (Yea, hath God said?) NOTE: This has been Lucifer's purpose before his fall.
(Isa.14:11-14)

The Second Coming of MESSIAH / THE LORD JESUS CHRIST

Daniel is here in the middle of it all

Daniel: Second Coming of MESSIAH "Forasmuch as thou sawest that thestone was cut out of the mountain without hands, and that it brake in pieces the iron, the brass, the clay, the silver, and the gold;

Click here for what takes place during this time period depicted by the two legs, feet and ten toes up to the "latter days"(Dan.2:28)

NOTE: How God s dealing with this block of kingdoms, which He destroys at one time
(Timesof the Gentiles?)

another (king / Little Horn) shall rise

The whole earth is divided into 10 kingdoms

NOTE: How they had entered the LAND then removed from the LAND. Then released back to the LAND to restore and build again Jerusalem, but did not posses the land. Then there is a  waiting to MESSIAH would come. THE PURPOSE THE REALITY

THE LORD JESUS CHRIST / MESSIAH / THE WORD MADE FLESH

You can add HTML directly into this element to render on the page.

Just edit this element to add your own HTML.

End of the age 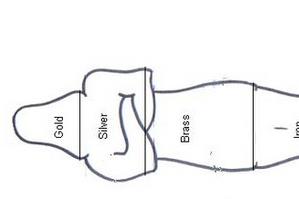 The time of the end

Time of the end

prophesying
here in the middle of the captivity. (Dan.9:1-2)
The Word of God is NOT bound. REMEMBER The House of Judah was being disciplined by God

NOTE: God rules in each one of these kingdom's "and does according to his will...and none can stay [0]his hand, or say unto Him What doest thou?" (Dan.4:32-35)
with the context / focus on MESSIAH not the anti-messiah

The MYSTERY of GOD / Daniel's people / Jews was to bring God's Redemptive Plan to CHRIST the CENTER PIECE / as concerning the flesh (woman's seed) Christ came CHRIST / THE MESSIAH / THE LAST ADAM came and reconciled both JEW (Daniel's people) and GENTILE as ONE MAN in HIMSELF in order to make THE LAST EVE / THE BRIDE. Then they will complete the purpose of Gen.1:26-31 WHAT DANIEL WAS SEEING is how GOD would bring the children of the flesh of Abraham to CHRIST / THE MESSIAH

NOTE: How God is setting up for the count down for the revealing of the MESSIAH
1.  They knew MESSIAH
was coming, but
they did not know
when. Gen.-2Chron.
2.  Judah's release
from Babylon gave
the "When" Dan.9
3. They could count
the number of years
from the restoration
of the City and
Sanctuary Dan.9:25
4. During this wait (the
silent period
between the Old and
New Testaments) was
the time of Greece
a the "little horn"
trying to destroy what
was foreshadowing
the coming of
Messiah
5. Dan.9 His revealing
6. His confirming the
Covenant Dan.9:27
7. Their rejection
and crucifixion (cut
off) Dan.9:26
8. Israel broken off
9. Overspreading Da.9
10. The antichrist to
deceive. Dan.7
11. JESUS / MESSIAH
Second Coming
destroying the
antichrist Dan.2

The Second Coming of MESSIAH / THE LORD JESUS CHRIST

The focus of Daniel's
interpretation was the
Second Coming of the
LORD JESUS CHRIST /
MESSIAH  (Dan.2:1-45)

Note:Daniel was not LOOKING at the conditions of the dominance of Babylon, he was looking (seeing / understanding 2Cor.4:18) of the first coming of MESSIAH THE SAME IS TRUE for the Second Coming of MESSIAH God's overall Purpose (Dan.1-12)